“Our world-famous $150,000 Freebuy Super Series is back to end the summer with a Texas Hold’em bang,” stated Michael Harris, spokesperson for Americas Cardroom. “We’re offering 10 straight days of 100% free tournaments. This is not a buy-in series sprinkled with a few freerolls. Every single tournament is free to enter and it all adds up to $150,000 in guaranteed prize money.”

The $150,000 Freebuy Super Series first launched in May 2015. The initial 10-day series offered players the chance to play free tournaments with real money prize pools and was a massive success, attracting a record number of new players to Americas Cardroom.

The Freebuy Super Series II takes place from August 28th through September 6th. The series is packed exclusively with freebuy tournaments. A freebuy is an Americas Cardroom innovation that combines freerolls and rebuy/add-on tournament format to create a unique event for free and real money poker players.

When a player registers for a Freebuy tourney, the player pays absolutely nothing and receives a chip stack for free. Each tourney also features real money rebuys and add-ons from $.01 to $20, depending on the tournament.

It gets even better! We will be running a leaderboard for the Freebuy Series where the top finisher wins the ultimate all-expense paid poker vacation package to the 2015 Punta Cana Poker Classic! The package includes:

Tournament buy-in to the $500,000 GTD Main Event ($1,650 value).
Round trip airfare up to $800.
6 nights at the Hard Rock Hotel and Casino Punta Cana
All meals and beverages
$1,500 in Resort Credits
Round-trip airport transportation (PUJ Airport only)
Welcome party access.

Our new tournament innovation gets you into the game to compete for thousands of dollars for free! Best of all, from May 8th to May 17th we will host a Freebuy tournament series with $150,000 in prize pool guarantees!

Last month we designed a whole new type of tournament that allows players to enter at absolutely no cost and compete for real money! These Freebuy tourneys have a rebuy/add-on structure but no cost for the initial entry, giving everyone with an ACR account an opportunity to play!

Registration begins two hours before each Freebuy tournament starts and the late registration is open for two hours (if capped players isnt met). The optional add-on period is three hours after the Freebuy kicks off. The series is open to all players with an ACR account, whether or not you’ve ever made a deposit. Simply register for the tournament and you’ll be sat at a table with a starting stack. You may then choose to add to your stack with a rebuy and add-on or just fight it out with the chips you receive with your initial free entry.

Rebuy and add-on units range from just $0.01 to $20 but you have an opportunity to win whether you add to your chip stack or not!

Here is the upcoming Freebuy schedule from May 8th to 17th:

Hurry! our $5,000 Guaranteed Freeroll/FreeBuy starts in about thirty minutes. If you want play in this tournament it’s free to all. If you are not a member of P4AC At ACR you still have time to join and play. Click here to Sign Up 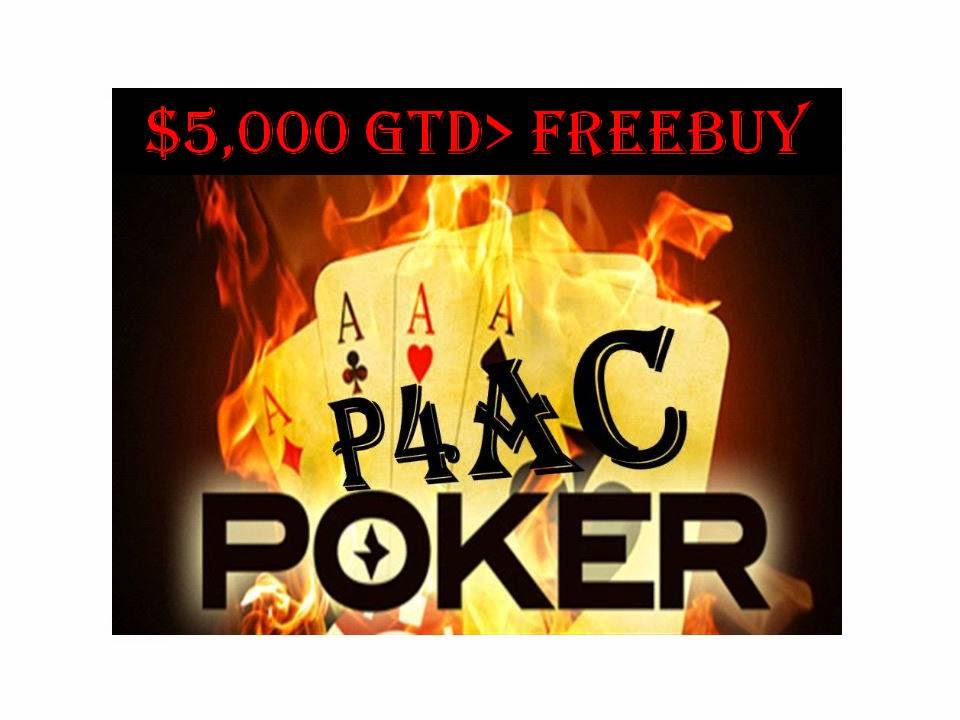 Tomorrow we will be having three freebuy tournaments. The first is at 7AM, the second one is at 2:30 PM and the third is at 10:00 PM, EST.
A freebuy is just like a freeroll in that it is free to get in. You are allowed to rebuy if you get knocked out and there is an add on so the pot could get even bigger than the $5,000.
This will be a great opportunity for new players that sign up to pad their bankrolls for free. Here are the details of the tournaments.
$5,000 Guaranteed FreeBuy
4/5/2015 at 7:00 AM, 2:30 PM and 10:00 PM, EST.
Buy in – Free.
$1,000 in starting chips.
Rebuys available till end of late registration $5 = 2,500 in chips.
Add on available during break after late registration closes $5 = 10,000 in chips.
10 minute blinds with a 5 min. break every hour.
Good Luck Everybody.
If you have not joined our team of poker players yet please click on our Americas Cardroom banner to get the free software and start playing with Team P4AC today.
Thank you.

Go Team P4AC!
WE’RE ROLLING OUT AN INCREDIBLE $25,000 GTD TOURNAMENT
WHICH ANYONE CAN PLAY…FOR FREE!
The $25,000 GTD Freebuy Tournament is our latest innovation that allows you to take a shot at thousands of dollars at absolutely no cost! On Sunday, March 22nd at 12:30 pm ET we’re upping the ante by hosting this game-changing tournament. This rebuy/add-on tournament costs nothing to enter and is open to all players who have an account with us on ACR!
We’ve capped the entry to this tournament at 8,000 players so you need to act fast!
To get started with your free 1,000 starting chip stack, just enter the tournament through the tournament lobby. From there, you have the option to either fight it out with your initial starting stack or increase your chip stack through rebuys (2,500 chips) and add-ons (10,000 chips) that cost $25 each.
You’re going to love the $25,000 GTD Freebuy Tournament With:
Free Initial Buy-in
Anyone with an ACR account can play
2 Hours of Late Registration
8,000 Player Max
Low Rebuy and Add-on cost of just $25 each
The time to act is now. Simply sign up for your ACR account today to get into this incredible new combination of a freeroll and rebuy tournament for free!
CLICK BANNER BELOW TO CREATE YOUR FREE PLAYER ACCOUNT & START PLAYING AND WINNING FREE CASH.

Let’s congratulate Unforseen Nemesis for her top five finish. She has just added to her bankroll again. Way to stick to our bankroll management approach to building a bankroll. She is well on her way to the bigger games. Bigger games mean bigger cash awards. WTG!

As always good luck and may your pocket pairs hold.

As always good luck and may your pocket pairs hold.

If you are a new player and would like a place to learn and play for free, may we suggest joining Team P4AC at America’s Card Room. We have play money tables, freeroll tournaments for beginners, cash games and tournaments for more serious player’s and anytime you play in any real money cash game or tournament at ACR when you sign up through us your rakes and fees will go to charity.

You will also receive.

Get 24/7 freeroll access, access to free one on one poker training with deposit of $25 or more, access to news letter and videos of live comedy, music and poker events plus updates about the people you are helping at P4AC Veterans House. Get a team patch, hat or shirt with any deposit of $50 or more. Get private game invites and access to P4AC freerolls.

Visit our chat page to talk with other members while you play or watch. Remember even if you do not want to play you can still watch other Team P4AC members as they play their way through the fields and try to place in the money. You will only need our free software. Click the banner below to download ACR for free and start playing, learning or watching for free and become a member of Team P4AC today.