However, with a Million Dollar Sunday tournament running every Sunday in October, plus one that precedes it in September, there’s opportunity after opportunity to become a champion.

Noted Harris, “Theoretically, it’s possible for someone to become a millionaire this fall. With $200,000 guaranteed for first place and five separate Million Dollar Sunday tournaments running throughout September and October, that’s $1 million in first place prize money. Of course, we’d love to see multiple winners, and given the fact that our poker community is growing immensely, that’s more than likely.”

More information on the 5 Million Dollar Sunday tournaments, including a full satellite schedule for each tournament, can be found at AmericasCardroom.eu.

J Todd talks about the latest anti-online gambling legislation proposed by Senator Lindsey Graham. Plus, he discusses Seals with Clubs founder Bryan Micon’s return to Nevada to appear in court, in addition to industry news about bwin.party, Ladbrokes and Amaya.

“I don’t think the issue is whether or not government should regulate gaming because it’s bad,” Poe said. “I think we tried that with prohibition, or ‘demon rum,’ as my grandmother liked to call it. And look where that got us.”

Poe didn’t mean to characterize the witnesses in favor of banning online gaming with this broad brush stroke. He realized the trap he was walking into when he began his soliloquy with “No offense, Mr. Bernal,” referring to the national director for the Stop Predatory Gambling Foundation who opposes all forms of gambling.

Poe was actually focused on whether the federal government had the right to regulate the Internet in all instances. But his inadvertent characterization of the testimony to ban online gaming was spot on. It was all “demon rum.”

John Kindt, a professor of business administration at the University of Illinois law school, said online gaming would destabilize Wall Street and the stock market by creating a “bubble” for online gaming stocks that would eventually burst.

Les Bernal said state governments were forcing citizens to gamble at casinos and on the lottery.

Washington University Law Professor Michael Fagan said there is no way “any individual or combination of state governments, can expand to the degree necessary to effectively police and regulate the likely scale of legalized Internet casino or poker.”

These statements don’t just strain credulity. They shatter it into a million pieces.

Chaffetz also argued that his Restoration of America’s Wire Act (RAWA), which bans online gaming at the federal level and gives states no say in whether they want offer online gaming within their own borders, is a bill that protects state’s rights.

When Rep. Cedric Richmond (D-La.) asked if RAWA would hurt the Louisiana Lottery, which he made clear funds teacher pay and other educational initiatives, Kindt and Bernal essentially accused him and the state of Louisiana’s of accepting the devil’s money and said he should run away from it. Aftab actually answered the question and said RAWA would stop any online lottery ticket sales.

For Kindt, Bernal,Fagan and Chaffetz, it’s all just demon rum. No credible evidence was provided to defend their claims. No attempts were made to refute the clear and overwhelming evidence that regulation is working in Nevada, New Jersey and Delaware. Online gambling was demon rum and it had to go.

The room housing the House Subcommittee on Crime, Terrorism, Homeland Security, and Investigations is actually pretty small. Yet despite its size, there’s an august feeling about the room. It feels like a seat of power, where important decisions are made after carefully weighing the facts.

Andrew Moylan, who runs the pro states’ rights R Street Institute, and Aftab came to the hearing prepared with facts and arguments about why regulated intrastate online gaming is good for states’ rights and good for consumers. Aftab noted that there were three cases in Nevada where kids managed to play online poker at a regulated site. She also explained in a fair amount of detail how identity verification works. Moylan explained exactly how the assumption that Internet commerce (and other activities) can only be regulated by the federal government “eviscerates” the commerce clause in the Constitution. They upheld the honor of the room.

Good morning all.  The first $5,000 freeroll/freebuy is still going on. Unfortunately the three team members of P4AC, Unforseen Nemesis, saltynuts and P4AC Poker are out. Out of 1,398 entrants, 8 are remaining. Hopefully more of Team P4AC will show up for the next $5,000 GTD at 2:30 PM EST or server time. 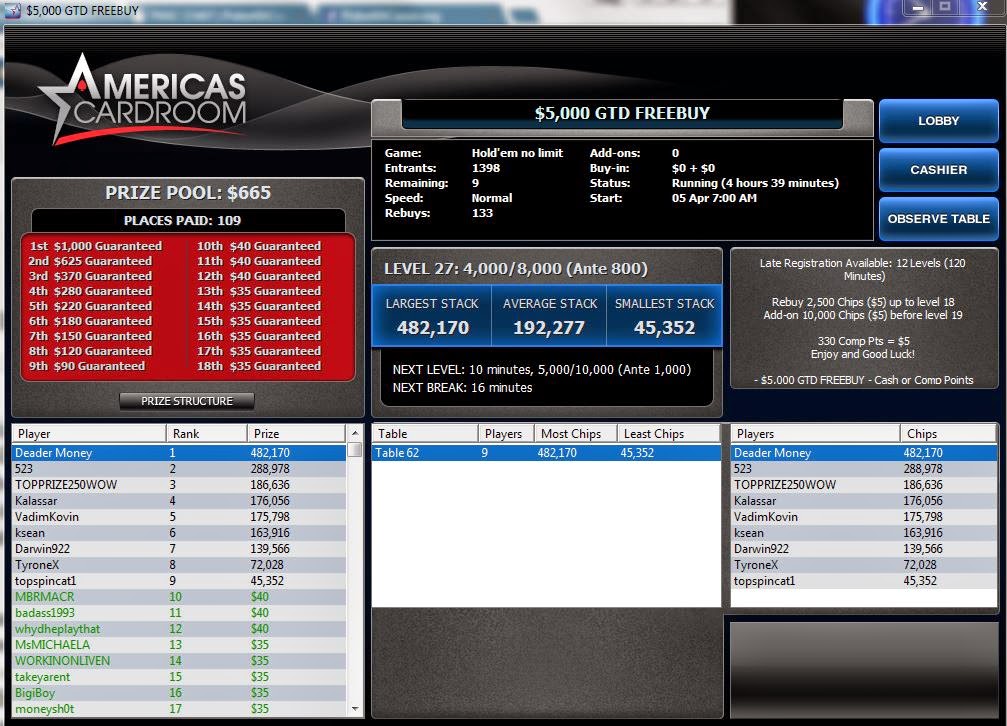 If you would like to watch our team play in support of P4AC’s Veterans House or if you would like to join our team at America’s Cardroom and become a supporter of Veterans House you will need the Americas Cardroom software. If you already have it great. Although you will be able to watch team members as they play in the various tournaments and on cash tables provided by America’s Cardroom in support of Veterans House. You will not be able to play in any of the private events or freerolls for team members of Poker4acause.org at ACR. Only team members who sign up for Americas Cardroom through Poker4acause.org will be able to wreap all the benefits that not only ACR offers but also the freerolls, leagues, private cash tables and more including packages to WPT and P4AC live events, not to mention that if you did sign up through Poker4acause.org no matter what tournament or cash game you play in wether it be a game provided by ACR or P4AC the rakes and fees from those games will benefit charity due to the fact that poker4acause.org donates the money earned through the rakes and fees generated by our members to our project called P4AC’s Veterans House.
If you already have or play at ACR but did not sign up through poker4acause.org and would like to become a member it’s easy.
When you log in to the ACR poker lobby just click on the help tab at the top right of the lobby. A drop down box will emerge with contact us as one of the choices. Click that follow the prompts on sending an email and then send ACR an email requesting that your account be tied to the ACR affiliate – P4AC. If you need any help migrating your account at ACR over to our team at ACR so that you to can support charity just by playing or learning to play the greatest card game on the planet Texas Holdem please email terry@poker4acause.org.
If you do not already play online poker or live poker with poker4acause.org and you would like to join either to play poker or learn to play poker and support our poker team as we play and teach in support of Team P4AC’s Veterans House it’s simple quick and easy. Just click on the ACR banner below. After you click the banner you will be taken to where you can get the free download from ACR and create your new player account with Americas Cardroom and Team P4AC/poker4acause.org. It only takes about 2 – 5 minutes and after that you just log in and start playing. If you are a new player, you do not have to make a deposit to start playing. Just click on the freeroll tab in your new ACR software poker lobby to bring up all available freerolls. In fact if you are a new player Team P4AC recomends that you not make a deposit but that you send an email to terry@poker4acause.org and ask for private lessons. You will get a coach that will help you until you are ready to try on your own. This service is free to members of poker4acause.
Remember our members keep or get 100% of the prize pools they win. The only money that goes to charity comes from just the rakes and fees of real money game play. So what are you waiting for. If you love to play poker our team needs you. Please click the banner below to start having fun playing poker for free, learning for free with free instruction and start building your bank up today!
A brawl involving dozens of people broke out inside the Resorts World casino at Aqueduct Race Track on Friday night, turning the opening night of a Fat Tuesday daiquiri bar into a fight night worthy of Las Vegas.
The violence was sparked by people angry about the long wait for daiquiris, law-enforcement sources said.
The fight spilled into the casino’s food court and then out into the parking lot.
Three people were under arrest late Friday night, law-enforcement sources said.
Investigators are looking into whether the fight was gang-related and whether shots were fired in the parking lot, the sources said.
Video posted online showed crazed patrons throwing chairs, shouting, and milling about.
Yelling and the sound of glass breaking can be heard in the background.

JOB OFFER – PAYS $37 PER HOUR.
Hello this job offer came in my email today. I am passing this along in the hopes of getting someone who needs a job some work. I can no longer work due to disabilities but I can still give out job offers that I receive to qualified people.
If interested please contact Octavia Underwood.

We are looking for a business service technician for the Houston TX area.

Technician will need the following tools.

If you’re interested please send me your resume and let me know when you will be available for work. We need someone as soon as possible.